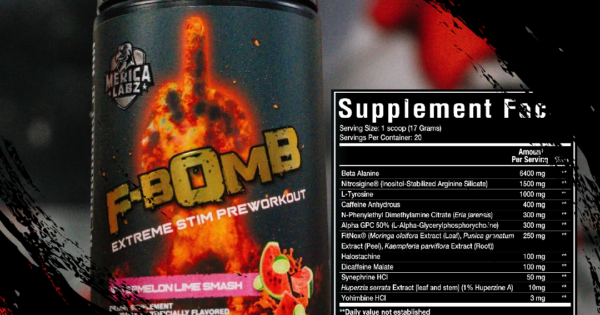 We love the guys at ‘Merica Labz for doing everything American style – that means going big and pushing the boundaries of convention in the best tradition of American ingenuity.

This time they’ve really outdone themselves with F-BOMB, an absolute monster of a stimulant-based workout whose effects will be felt by even the most level-headed among us. While we love their other pre-workouts like the original Red, White, & BOOM and the fat-burning hybrid NAPALM Red, White, & Boom, F-Bomb is for those looking for a little…actually a lot… more.

F-BOMB is going to put you over the top on that final rep, that last mile, or those last few dozen bleacher reps – and you won’t just be doing it for yourself, you’ll also be doing it for America.

Inside, we’ve got 473 milligrams of total caffeine paired with a whole slew of stimulants, including synephrine, halostachine, yohimbine, and the advanced form of PEA found in eria jarensis. This thing is no joke and most will want to do a half-scoop. And if you haven’t noticed the front of the tub… take a look to notice it now!

Below, we detail the formula per the late summer 2022 release. After that, F-Bomb may no longer be the same, so if you like this formula, you better snatch it up fast!

In a single 1 scoop (17 gram) serving of F-BOMB from ‘Merica Labz, you get the following:

F-BOMB lives up to its name – this is a truly explosive formula absolutely jam-packed with powerful stimulants that will give you a huge burst of energy for your hardest workouts.

Stimmed up formulas work really well for some people – for other people, not so much. What gives one person a clean, sustainable buzz might give another the jitters and keep him up at night.

The issue here is that with so many different stimulants, it can be really hard to tell what’s causing the issue unless you have extensive prior experience with each stimulant in the formula.

Ultimately, as with anything else, only you are responsible for assessing your tolerance. If you’ve never taken yohimbine or synephrine, for example, start with a partial scoop of F-BOMB and work your way up to a full scoop.

Of course, if you need to tone it down from Merica Labz, check out Red, White, & BOOM or NAPALM Red, White, & Boom. If you couldn’t tell, alongside Merica Energy, this kind of product line is the future of Merica Labz.