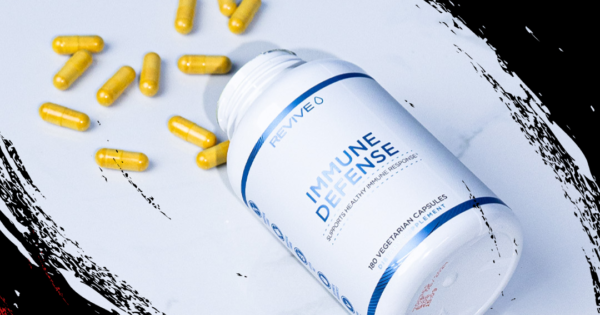 Revive MD is a brand that lives up to its name. Founded by real-life medical doctor, Domenic Iacovone, and his business partner Matt Jansen, Revive MD’s supplements are distinguished by the fact that real institutional medical expertise goes into formulating them.

You’d expect an MD in the supplement game to be really on top of current product research and understanding how different ingredients should be combined for complementary/synergistic effects. The Immune Defense formula we’re reviewing today is a great demonstration of Revive MD’s mastery of frontline research.

Revive MD has previously released supplements in this category — Immune Multi, a multivitamin with some supplemental immune support; and Revive MD Zinc, which is a big dose of – you guessed it – zinc.

We’ll be talking about zinc a lot today because there’s a good amount of it in Revive MD’s newest health and wellness supplement, Immune Defense.

As opposed to the supplements linked above, Immune Defense is Revive MD’s dedicated immunity booster and it’s filled with awesome cutting-edge ingredients that, despite having plenty of research backing, have not yet entered common use among supplement manufacturers.

We’re really impressed with this formula, and we hope that Immune Defense helps push the industry, as a whole, toward recognizing the enormous benefits of the ingredients represented here.

A wonderful stack of ingredients for immunity. The next couple of things we’d add? NAC (without a doubt), and if you’re really getting concerned, some garlic.

This is a six capsule serving size. It can all be taken once per day with a meal, but if possible we prefer an AM/PM dosage split roughly 12 hours apart to space out the supplement’s support.

A final thing you should know about Revive MD is that everything they put out is third-party lab tested for any residues of banned or controlled substances, making it a brand that’s safe for drug-tested athletes.

Although you might expect a product like this to focus entirely on boosting the intensity of the immune response and facilitating adaptive immunity, there’s actually quite a bit of focus on helping regulatory T cell function, which is crucial for long-term immune health and preventing autoimmune diseases.

So this isn’t just an anti-viral or anti-microbial supplement – it’s a serious attempt at supporting comprehensive immune health.

This is a very well-timed release. Despite the mysterious “disappearance” of influenza (or at least influenza reporting) the past couple of years,[61] it seems that it’s back in the mainstream zeitgeist for the winter of 2022/2023, so it’s best to have your body prepared with the weapons to fight whatever they throw at us next.