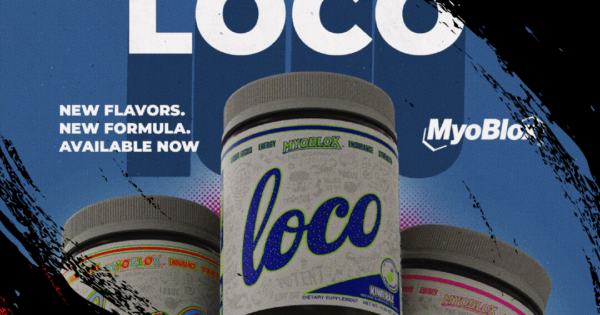 Those are the words you’ll see saddled across the top of the new Myoblox Loco tub released in September of 2022, and they mean every bit of that. We recently covered MyoBlox BLO 3D, the counterpart stimulant-free pre-workout supplement for huge breakthrough pumps. Now, it’s time for its more fiery half. 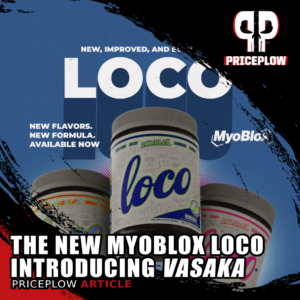 MyoBlox Loco has been upgraded in 2022, and the highly psychoactive, high-energy pre-workout supplement has 400 milligrams of caffeine and a new bronchodilating ingredient named Vasaka!

This high-energy pre-workout supplement, which has 400 milligrams of caffeine in a two-scoop serving, but that’s certainly not all. As the label states, this one has Off The Wall Energy, and it comes with a new ingredient to give you a big boost:

Inside of this whopping energy blend, we have Adhatoda Vasica Extract (also known as Vasaka), which may bring some bronchodilator effects that are loved in other, now-banned stimulants. It may just be what puts this caffeine-heavy energy blend on the next level, alongside a strong hit of L-tyrosine and theobromine.

But that doesn’t mean there won’t be pumps — Loco still has a full clinical dose of Nitrosigine and sizable hits of citrulline malate and agmatine. With these three together, we may not even need to stack in BLO 3D (although we wouldn’t say no to it).

Note: The new version released in Fall 2022 that’s discussed below is the 40 serving version.

Many of our readers already understand this label, and simply want to learn about the new ingredient. If so, you can skip to the Vasaka section. Otherwise, keep reading.

The new version discussed here comes in three flavors, shown in the 40 serving section: Kiwi Ras, Sour Gummy, and Watermelon. Below, we’ve highlighted them in yellow, but you may see other flavors from older versions still available. If you want to get the new formula, check the label.

As mentioned in the intro, you can feel free to stack with the new BLO 3D on big arm days, but with Nitrosigine, citrulline malate, and agmatine, we’re confident that this one has enough pumps on its own for the vast majority of pre-workouts.

We recently covered the high-stim Myoblox Skywalk, which also contains 400 milligrams of caffeine. Needless to say, do not stack that one in. It’s one or the other, folks!

Psychoactives, muscle primers, nootropics, and caffeine. After going through this label, they’ve got that right.

Question is, can you handle a full two scoops? If so, get ready for one hell of a Loco ride.

Note: The new version released in Fall 2022 that’s discussed below is the 40 serving version.